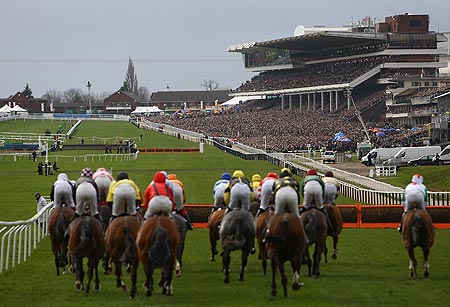 Any horse racing fan will know that in the United Kingdom there are many big races in the year but non much bigger than the Cheltenham Gold Cup. This week will be the start of the 2014 festival and this year promises to be the biggest ever in which the crowds will be bigger and the the television viewers being the largest ever.

The bookies are going all out this year and are spending an increasing amount on advertising and gimmicks. I have no actual figures of how much is generated in bets over the week but I expect it to be in the millions. The main day of the festival is the Gold Cup day but the days leading up to it are just as big in terms of prize money and as an event in general.

The days of the Cheltenham Festival are as follows:

This is the day of the festival when women from around the UK and Ireland dress elegantly for the day and make this day truly spectacular. This day can often be better than the main race day because of the large crowd it attracts. Overall a fantastic day to attend.

The Cheltenham Gold Cup is a Grade 1 National Hunt horse race run on the New Course at Cheltenham Racecourse in England, over a distance of 3 miles 2½ furlongs (5,331 m), and during its running there are 22 fences to be jumped. The race is scheduled to take place each year during the Cheltenham Festival in March.

“Large amounts of money are gambled during Cheltenham Festival week, with hundreds of millions of pounds being bet over the four days. Cheltenham is often noted for its atmosphere, most notably the “Cheltenham roar”, which refers to the enormous amount of noise that the crowd generates as the starter raises the tape for the first race of the festival.”

Tickets for the festival range from £30 for the cheapest stand in Best Mate or up to £200 for hospitality on Gold Cup day. The festival attracts over 100,000 people across the week and with the weather for next week expected to be great, the numbers will surely be the best ever. Last year was a washout and therefore organisers are hoping for a good week.

The Windy City in 36 Hours